I’ve been working on the route for the End Of Days Ride, checking out the conditions of some of the seasonal roads and such.  There was some flooding on the trails behind Blackwater Dam, but it is good enough to get by, though some hike-a-bike may be required for a few small sections.

Paul and I headed down to Ashland, Ma for the Rockbuster Duathlon, a 1.8 X-C run, 5.5 mountain bike, and 1.8 X-C run again.  The weather was less than desirable heading out of NH.  Forecast was for 40’s and rain.  Not 2 seconds after leaving Paul’s house to head down to the race, it started to rain.  We got a little bit of everything on the way down.  Rain, some sleet, etc.  Since it was just the two of us, I don’t have much in the way of photos.  Paul ended up smoking me in the transitions to claim 3rd in our age group and I was 4th.

It stopped raining just as we got there and didn’t start again until about 2 minutes before I crossed the finish line.  One the way home Mia texted me to say it was snowing in NH.  I had about 1/2″ of snow on my car when we got back to Paul’s.

Mia and I headed to Exeter for the 5th race in the Will Run For Beer Series.  This was my 4th race of the series and I need to do 5 out of 6 to qualify for the coveted wind breaker jackets they give out at the end of the series.  I was not too sure of my form, this really has been a cold and dreary spring and I have been running about 1-2 times per week and riding when it is nice enough to get outside and it isn’t raining.
I ended up with a 21:06 for 44th overall.  Mia ran a great sub 30 minute 5K and by 10:45 we were sitting down to chicken fajitas and margaritas.  Definitely one of the cooler post race “parties” I have been involved with.
Results here 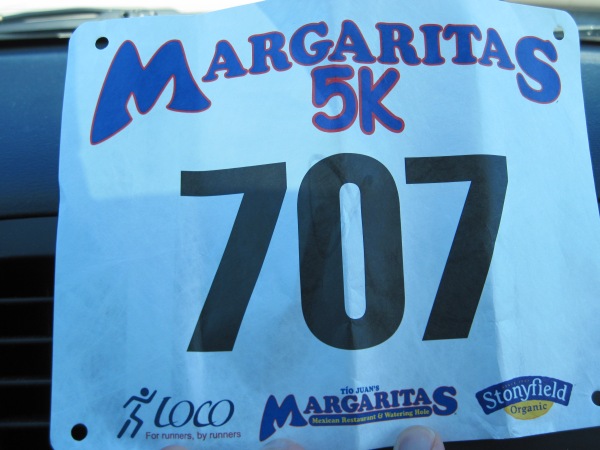