I’d like to first mention the simple fact that it is now Sunday evening as I type this and we are all still here.

I had Jeff Warner and Brett St. Clair join me for the loop.  The weather turned out perfect for the ride.  We even had some pretty ominous looking clouds at times that we thought could be signaling the beginning of the end.

First few miles of the ride are mostly pavement, short section on an old railroad bed and then some power lines and snowmobile trails back to pavement. 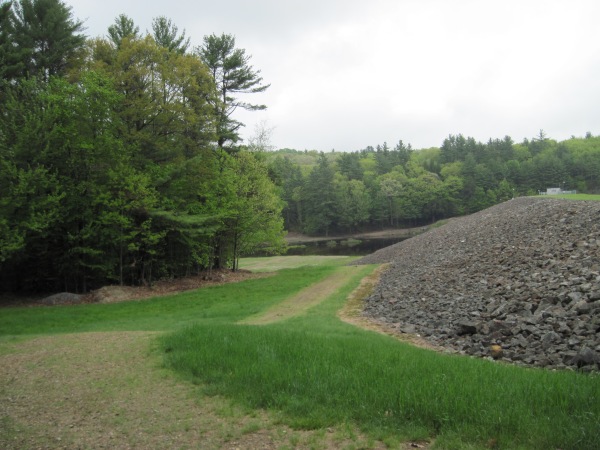 The water behind Blackwater Dam was much higher this week then when I did the recon of the loop last weekend.  I was hoping the next sections of trail would be passable.

Only a few short sections of the trail had water in them.  This was probably the worst part and it was maybe 50 feet long.

On Couchtown Rd, there is what has got to be one of the largest junk car “lots” that I have seen that is not officially a used car/spare parts lot.  This guy must have had problems with people stealing stuff in the past.  This is just one of many messages spray painted on his not so high tech security fencing.

The last off road part of the whole loop ends on this railbed.  The gravel has got to be in the 3-4″ range is lasts just long enough to make you think you’re going to go nuts.  Then it turns to packed dirt, then back to gravel again, etc, etc.  It’s a nice little test of the legs after a lot of small  punchy climbs, extended hills, dirt roads and a little bit of single track.

Finally, here is Jeff staring into what we thought could possibly be the beginning of the end.  The clouds looked pretty nasty and we were pretty sure we were going to get dumped on soon, but it never came…….

I want to thank Jeff and Brett for joining me.  I noticed quite a few more side roads that I need to go explore to see where they go.  If possible, I’d like to add some more to this loop for next year………E.O.D. II.

Here is the GPS data.