I’ve had my Salsa Fargo now for almost 4 years.  It has seen only slight changes since I originally built it up.  I toyed with a 2×9 drivetrain before settling on an XT triple ring setup.  Barend shifters have also been my choices since day one.  Finally went tubeless on it last year too.  Other than those changes and some seat and seatpost changes it has remained largely as is from day one.

The only option I had at the time of the original build was Avid BB7 or BB5  mechanical disc brakes (i.e. cables and housing).  They were really the only viable game in town and they made a set that would work with road levers as opposed to mtn bike levers.

Now with the coming 2014 model year TRP has come out with the first respectably priced hydraulic drop bar disc brake option, the Hylex.  From what I have read, they were going to try and make a move with Shimano Di2 integration originally, but opted not too once Shimano upgraded the software on their electronic shifting. Or at least something like that.

So Universal Cycles finally got some in stock and I ordered a front and rear pair of them, with a handy discount coupon to lower the price too (MSRP is $146 each).  It is really handy (and dangerous to my wallet) that they have a local brick and mortar shop in town.  Nothing against my good old home state of NH.  But none of the shops in my hometown had nearly as much in parts and accessories in stock as the shops here in the greater Portland area.  I can actually go in and buy a campy 10 speed chain and not have to special order it.  That may sound absurd to some, but that was a fact of life back in my old area…..

Anyways, back to the brakes……..The Avid’s were original pads and rotors and the pads were definitely getting worn.  I did have them setup with gore ride-on cables and housing which kept them working flawless for all these years, but they never had quite the smooth and superb stopping power compared to hydraulics. 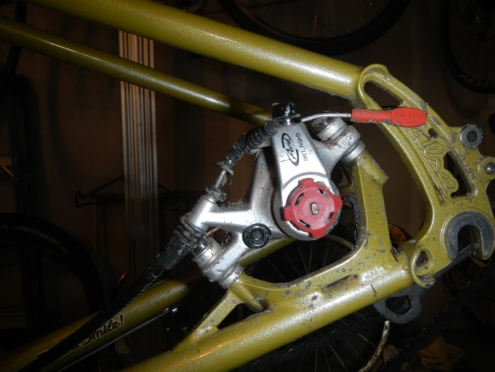 Install on these was beyond simple.  They come pre-bled and the housing length was perfect for my setup, so no trimming was needed.  Which was a good thing, since I don’t have the tools to cut and setup hydraulic lines.

The ergonomics are pretty decent and the brake levers have a slight outward flare to them.  I need to mess around with the reach adjustment a bit in order to dial in the fit.  This is accessed via the small hold towards the top of each brake lever.

I only rode them around the driveway area and tried to get them to break in a bit.  Further testing/riding in the coming days.  Initial impressions are very good though.