Another weekend, another hike with Mia and Codi.  This one was all about getting out to some place a bit cooler.  Temps for the PDX Metro area were calling for upper 90’s all weekend, so we wanted a hike with some water and some elevation.

Mia picked Twin Lakes based on this hike being listed in both the 100 Hikes in Oregon and 50 Best Hikes with Dogs.  So we figured it had to be worth it.  I’d also driven by the Barlow Road area quite a bit, but wasn’t sure what it was all about.  We chose to start off route 35 because it was the longer and supposedly quieter option.

Even though we were starting at just over 4100′ in elevation, the temps were only in the low 80’s.  It had dropped about 4 degrees after we left Gresham and started up route 26.  What was more telling was that it was about 82 or so when we left the parking area after the hike, but it topped out around 98 down in Gresham.

Anyhow…..the hike itself is fairly straight forward.  The trail conditions are best described as dusty and wicked dry.  Scary dry might be a better description.  If we make it through the summer without a major forest fire, I will be surprised.

We ended up starting a couple minutes behind a couple on horses and I think Codi was tracking them down.  He was very curious about what these big huge “things” were.

We stopped about an hour into the hike to give Codi a water break.  he decided it was best to lay down on the job.

We soon came upon upper twin lake, which is the shallower of the two lakes.  It almost looked like you could wade across the entire thing.  Since it was HOT, it was also a great time for a swim.

Then it was time for lunch 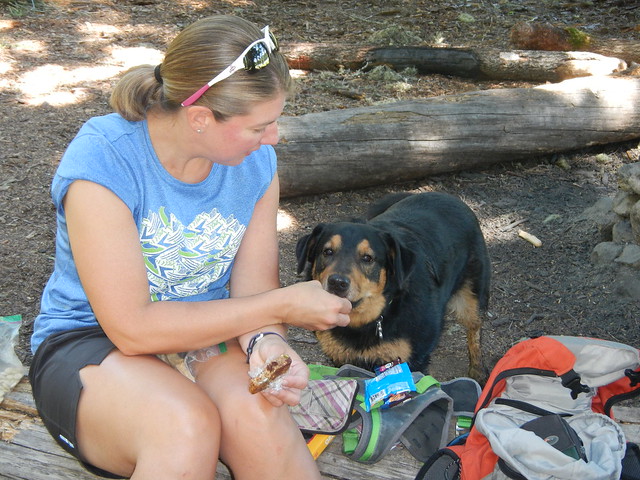 There were 4-5 nice campsite surrounding the upper lake.  after walking around the whole thing (not that difficult) we headed to the lower twin lake, which is the more popular of the two.  If you park near the Frog Lake side for this hike, it is only about 2 miles in.  We were approaching 4.5 miles from the side we started at.

It was definitely more crowded at the lower lake.  A group of 4 adults and corresponding 4 children came in and set up camp after we got there.  Plus the 3-4 other families who had already claimed their spots.  The upper lake is definitely on the list for a camping weekend.

Here is a little fun that Codi had..