Mia and I decided to #optoutside (Yeah REI!) on the Friday after Thanksgiving.  It took some convincing from me to Mia for us to hit up the Wolf Creek Trestle Hike out in the Tillamook Forest.  This rail line was abandoned in 2007 after the devastating storms known as the “Great Coastal Gale” and resulting floods, landslides, etc damaged the railroad beyond hope.

It all came to my attention after mention of converting it to a rail trail and allowing an off road route from the Banks-Vernonia trail all the way to the Oregon coast.  I wanted to go check it out for quite awhile and finally got Mia to go with me yesterday.

We got a bit of a late start, but were on the trail by 11ish.  It’s a railroad, so there wasn’t exactly a lot of elevation change.  Plus this area sees a lot of hikers, so the trail was easy to follow.  Heck, there had to be at least 6-7 cars already there when we arrived.   The hardest part is finding the trailhead since it’s about 6 miles from the nearest paved road.  Both of us remarked that we saw way more people than we expected (probably close to 20 coming and going).  Mia was expecting two toothed rednecks with shotguns….I was a bit more optimistic.

The hike itself goes through 2 tunnels and over 2 trestles.  Along the way are several remnants of the railroads past.  Like a couple water tanks, rail switches and spare ties and rail.  Rumor has it some where nearby the parking area is an abandoned rail car too, we had no luck in finding it though.  I even hiked almost a half mile in the opposite direction towards Reheers camp with no luck.

The two train trestles were pretty cool to say the least.  One of them was close to 200′ high.  There was a plaque near the first one in memory of 7 workers who died when the original collapsed.

Along the way there are various sections where the tracks have been compromised by either erosion or landslides. 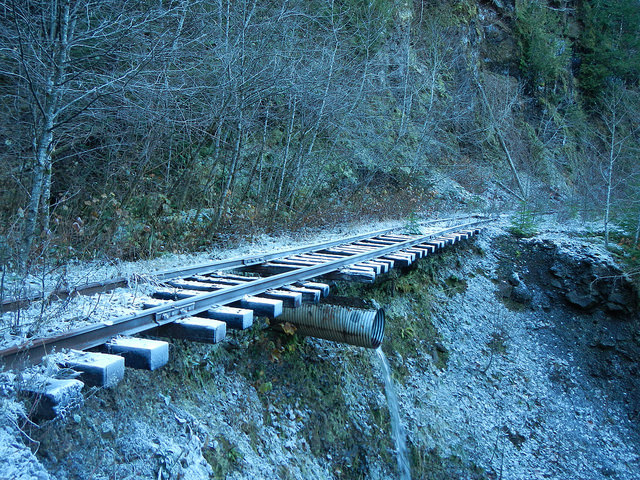 We turned around just beyond this point above.  I’d like to go back and try to hike more of it.  I found a blog post way back before we even moved to Oregon where two guys fatbiked the whole route from Timber to Tillamook.  I’d link it, but cannot find it again.

It was fun, not super challenging, unless you have a fear of heights.  If it catches your fancy, it’d recommend doing it in the fall or winter when there are no leaves on the trees growing around the tracks.  It could be a bit more difficult to walk this route when everything is in full bloom/leaf.

all the pics here

That’s about it.  Thanks for reading,