Let’s start with the basic route description of the Gorge Ground up.

It’s that 6K’ in the 1st 30 miles that really sums it up.  We averaged only 10 MPH, total time from start to end was just around 6 3/4 hours.  That is the boring stats though, what is impossible to convey in words is just exactly how awesome this loop is.

I’ve been trying to decide the best words to describe this ride.  The superlatives that I have come up with are awesome, hard, beautiful, difficult, challenging, gnarly, sweet, scenic and in my New England parlance…wicked!

I’ve got to thank Dean and Mark for coming with me, and for Trevor Rice for letting me know about the event in the first place.  While the turn out was not as large as the Prison Break, it was sufficient.  I would definitely put this ride as harder than Prison Break too.

Dean, Mark and I started out a bit before the official roll out of 9AM.  Right from the start we were climbing.  We fully expected to get caught by people but it took a bit longer than we expected.  I believe there were some initial doubts to my navigation skills.  Especially since this was my first time using my Garmin 520 as a “directional tool” instead of just following someone else (like Dean).  We started to see other riders around mile 12 or so and hooked up with a bigger group around mile 20.

It took about 4-5 miles before we hit the first of the gravel roads and from there we didn’t see a whole heck of a lot of pavement until towards the end, about 6-8 miles to go.  The first 20 miles or so were made up of good gravel and dirt roads, the kind that have residences off of them.  The middle 10 or so miles would prove to be a bit rugged and remote.  Then the last 15 miles or so was mostly downhill on gravel followed by rolling tarmac back to Hood River on roads and bike path.  I will say that the 3-4 miles we spent on some powerlines and then the first part of the downhill was the most difficult part of the ride.  I was not disappointed at all with how the Niner rode.  Though at one point I did hit a pretty large rock with my front wheel which has prematurely ended the life of that wheel.  However, the tire stayed inflated and no sealant leaked out at all.  Very impressed with the Stan’s grail rim. 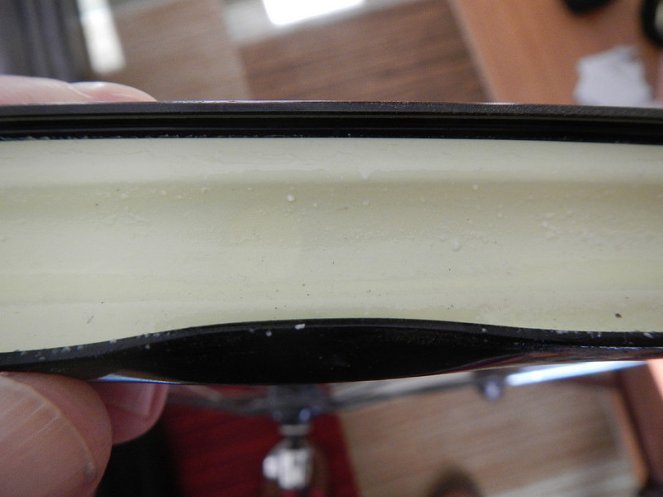 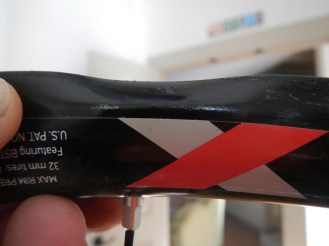 no air or sealant leakage at all 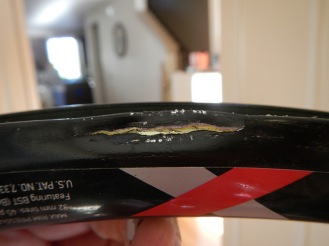 cracked formed after bending it out with some pliers

Very few other mechanical incidences that I am aware of from this ride.

Around the 18-20 mile mark we hooked up with Trevor’s group and we all rode most of the last 30 miles together.  It was a total blast!  I’ll just share some highlight pictures now….. 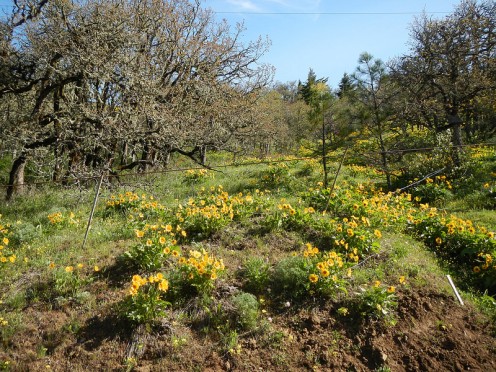 These yellow flowers were all over the place 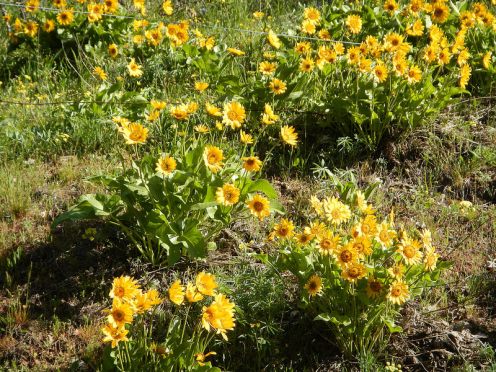 It was a long but super fun day of bike riding.  We totally scored on the weather.  I think we started in the upper 40’s and ended in the low 70’s.  Sunshine galore and as far as I know nobody got hurt.  That is a good ride.

All the pics can be found here.