The official name of this route created by The Swallows is the “Central Oregon Backcountry Explorer“.  I’ve been calling it the Prineville Loop or Ochoco Loop.

Back in December/January Dean and I started talking about doing the Oregon Outback in late April.  Which then turned into follow the Outback route until Prineville then morph off into this C.O.B.E. loop.  I was calling this alternative the Painted Outback since we would be going by the Painted Hills.  However way too many things conspired against this idea.  Mostly the super crappy and LONG winter we just finally got through.

Common sense prevailed and Dean and I settled on the C.O.B.E. in 3 days.  The 3-day option starts with a nice simple 27 mile day, followed up by an almost 70 mile day and ending with a final 60 mile day.  Sounds simple right?  It’s not!  Maybe 150 miles on the pavement would have been easier, but this ride includes miles and miles of gravel road and long extended climbs.  Don’t get me wrong, it was an awesome ride and the loop is beautiful.  That being said though, it ain’t easy.

If you ask the Prineville Visitors Center allows you to park a car long term.  The whole “we’re not responsible for your vehicle or its contents” applies here.  However we were not worried.  The gentleman who helped us was very pleasant and gave us some intel on camping spots for day one.

There is a grocery store called Wagner’s Market directly across from the Visitors Center parking lot.  This allowed us to grab a quick lunch and some sundry items for our first day of riding.  It was also awesome at the end of the 3rd day when we were both dying for something cold to drink.

After unloading the bikes and getting changed we were quickly on our way.  Dean has ridden a good part of this section from when he did the Oregon Outback a few years ago.  It was all new for me.

The first miles out of town are pavement and not all that exciting.  Eventually though you end up on FR-27 in the Ochoco National Forest and start a long and gradual climb to just over 5,000′ in elevation.

After we entered the Ochocos we saw maybe 4-5 cars on the long climb up FR-27.  I would wager that this is a bit more busy on a weekend, but being Thursday afternoon it was super quiet.

Lots of trees and not much else 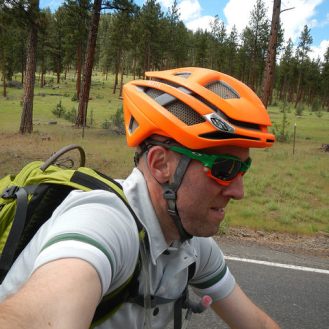 So glad to be doing this route

almost at highpoint of day 1 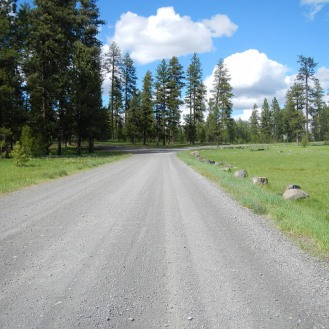 Once reaching the summit of the day it was a quick 5-6 miles downhill to find our camping spot for day 1.  You enter private ranch land at mile 27 so we camped next to a stream (aka a creek out here) at mile 26.

Our campsite was at about 3,600′ in elevation.  It got pretty chilly by the time morning arrived, but this would be the last time for the rest of the trip that we thought it was cool/cold.

The theme for the first few hours was creek crossings.  I lost count of how many but it was at least 5 or 6 I think.  Most of them were running across the road/trail.  One of them though was probably 100′ long and was running with the road.  It was also a tad deep for the first 10-15 feet, definitely over our hubs.

Now is probably a good time to mention a few things……

The one takeaway I have from day 2 is that I need to write down a “cheat sheet” of information.  For whatever reason I thought the Painted Hills was at the 1/2 way mark of today (about 35 miles).  It wasn’t.  It was almost 55 miles into the day.  I had almost 4 liters of water on me starting in the morning and I went through almost all of it before reaching Mitchell.  Dean startd with 2 – 23oz water bottles thinking it would be 2.5 hours to the Painted Hills.  It was closer to 5 hours.  If not for some “trail angels” from Denmark in rental RVs who gave us both some bottled water it could have gotten a bit ugly.  We rested in the shade for probably close to an hour once we got to the Painted Hills.   The main goal now was the last 10 miles to Mitchell and our lodging for the night. Dean decided to skip the short detour to the Painted Hills viewing area. Mia and I went in 2014 though, and here is that visit.

When I say newborn I mean it.  He was all gawky running down the road and momma still had the umbilical cord hanging out of her “hooha”.  My completely wild guess is that he wasn’t more than a couple hours old.  Eventually they took off to the right when the road went left.

From the Painted Hills to Spoke’n Hostel was about 10 miles.  It was a very hot ride into town and we were both so very happy to have a place to rest after an almost 7 hour day.

Night 2 we had reserved two bunks in the Spoke’n Hostel.  They have officially been open for just over one year. The hostel is in an active church in the tiny town of Mitchell, OR.  There are not enough superlatives to describe the kindness of Pat and Jalet.  Pat was generous with his time and knowledge of the area.  They are doing this right and I wish them and the town of Mitchell all the success in the world!

People who know me, know that I am not a city person.  I much prefer rural surroundings and Mitchell was quintessential small town America.  So quiet and peaceful, what more could you ask for?

Based on input from Pat about food choices Dean and I walked the daunting 0.3 miles to the Sidewalk Cafe in “downtown” Mitchell.  Now keep in mind that 7 hours on the bike would mean that almost any food is a welcome sight.  BUT, the chicken & bacon sandwich I ordered was fabulous.  Toss in some curly fries for nostalgia and end it all with blackberry pie and some ice cream!  We’re talking seriously happy man here.

Dean and I were back at the hostel by 8:00pm and I think we were both dead to the world well before 9pm.  Deep sleep is the payoff of a long and hot day!

For Saturday morning Dean took Pat up on the offer to be driven to the high point of the day, he was pretty cooked from the past two days.  I failed to mention earlier that back in the PDX area Dean’s allergies had been doing a number on him.  When he picked me up Thursday morning he sounded like he was on the wrong side of a wicked horrendous cold.  While allergies significantly reduced for him even on day 2 the energy expenditure was catching up.

I left early with the goal of meeting Dean at the summit and as fate would have it, they arrived in “Raymond” (their hostel van) less than a minute after I got there.  Superb timing!

From the hostel to the summit was close to 15 miles and close to 3,500′ in elevation.  The gravel was pretty loose and just slow.  Great scenery though.

From the high point back to Prineville was still close to 47 miles.  Between meeting up with Dean and hitting the paved descent at Walton Lake it was not flat!  Slow grinders followed by a little tease of a downhill over and over for 15 miles.  Once the gravel road ended and we were on pavement things picked up.  We had close to 8 miles of downhill, followed by another 8 miles of slight downhill.  The final 16 miles on highway 26 are not flat but not obviously downhill either, even though you are still losing elevation.  It was made a tad more difficult because of a headwind the whole way back into town.

All in all though this was a fabulous route.  The heat was rough on day 2, but the scenery and solitude was difficult to beat.  Dean and I had the repeated conversation about the feasibility of doing the first almost 100 miles to Mitchell in one swoop on 700x40c tires and our “gravel bikes”.  We both think it would be totally doable.  The hardest part is the lack of fresh water in those 100 miles.  You’d have to carry A LOT of water and/or be prepared to filter out probable cow poop tainted water (not high on my list of things to try).

Anyways I could probably write on and on about this trip.  It really was a blast, and while pretty darn tough at times, I am already trying to figure out how to get back out there again for some more exploring.

all the pics here.