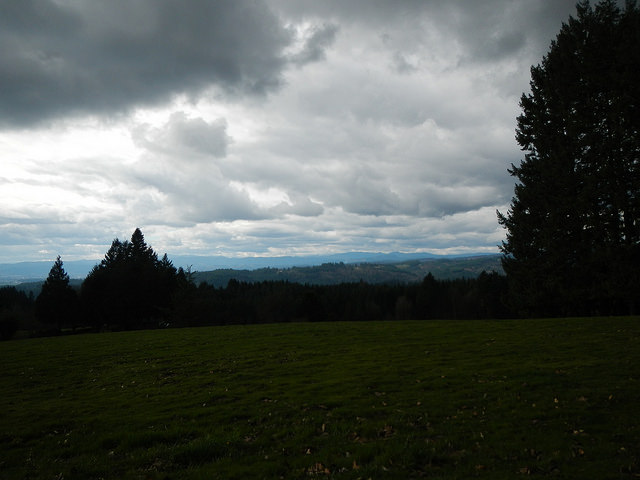 The working title for this blog post during today’s ride was “Fucking Skyline”.  My mom reads this though, so I thought of something a bit more appropriate (sorry for the F-bomb mom).

Anyways let me start with the forecast, which the weather peeps totally blew today.  Everyone was expecting showers in the morning and perhaps all day.  Over here on The West Side though it was cool, dry and occasionally even a bit sunny.  Mia and I took Codi out on a nice long urban hike (makes a “long walk” sound cooler….).  When we got home it was still looking pretty nice out so I opted to get my planned long ride in outside.  I had been dreading the thought of doing it on the trainer so of course it didn’t take much to convince me to ride outside.

Hands down one of my favorite loops from home is one that I call “Rock Creek”.  It works its way up to Skyline via Jackson Quarry, Mason Hill and Moreland Rd before I get to bomb down Rock Creek and come out near the awesome Rock Creek Tavern.

Down in the valley near home it was really nice out.  Bit of a breeze out of the east, but mid 40’s and intermittent sunshine.  About halfway up to Skyline I got my first warning you could say.  Meteorologically I don’t know the difference between hail and sleet, but it was briefly doing one of those.  Temps were steadily dropping too.  By the time I hit the end of Moreland and banged a right onto Skyline it was 35F, still dry though.  That was about to change.

I made my right off Skyline to head over to Rock Creek’s curvaceous descent (makes it sound sexy doesn’t it?).  I also pretty much turned into a light but constant rain.  The road was soaked and it looks like it had rained a bit harder not long ago.  Pissah!  All the way down, past the tavern and a right onto Phillips and it was still wet.  My hands were cold too since I opted for my preferred no gloves option, live and learn.  Finally the roads dried out as I got down onto West Union and headed for North Plains.  Back down on the valley flats the roads were dry like nothing ever happened down here…..figures!

So why is this called “I should know better” AKA “Fucking Skyline” (sorry  mom)?  Because I’m pretty much batting one thousand lifetime for winter rides up to Skyline that start nice and dry in the valley and end up raining on Skyline.  It’s a great ride in the summer but no matter what loop I choose for winter months, if it involves Skyline it also includes rain.

How’s that for some useless  information?

One thought on “I Should Know Better”