Mia and I have acquired a new member to this Rhodes household.  His name is Codi (or Codi-Bob for his redneck name).  We rescued him via Indigo  Rescue.

He is a remarkably well trained dog.  He is crate trained, knows his commands, does not wonder off when off-leash, does really well with other dogs, and so far has done well with other people.  For the life of us, we cannot figure out why the previous owners gave him up. I theorize that perhaps he is a serial killer and right now he is just buttering us up, trying to convince us to let our guard down.  So if Mia and I disappear…..blame the dog!

We’ve also been working on getting a routine going with him that allows both of us to exercise.  It’s working okay so far.  He’s already shedding some weight too, since we was a bit tubby upon arrival.

This is also the weekend of the Hillsboro Airshow.  Our first experience since moving into this house.  We’re less than a 1/2 mile from the airport, and kind of get a free show.  So far the most impressive has been the F-22 fighter that shakes the whole house.  I’d really hate to be on the receiving end of one of theses guys.  Just the sound of the plane is intimidating enough! 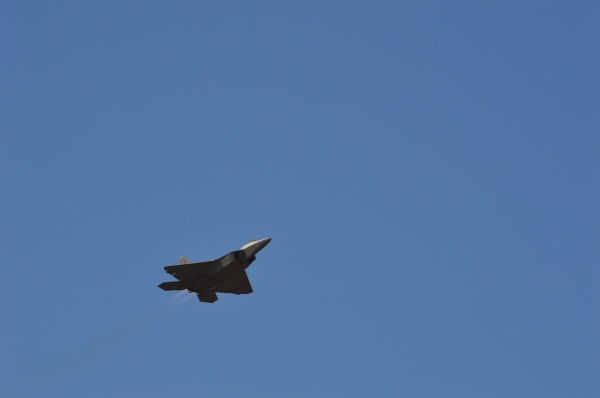 We’ve also see the Canadian Snowbirds and some other acrobatic flying teams.

Caleb has been a little less than impressed with some of the jet and plane noise, but Codi has done alright.  Both made it through the fireworks on Friday night unscathed though.