Mia’s birthday falls quite conveniently on or around Memorial Day.  We’ve made it an annual tradition to go away for this holiday weekend and this year was no exception.

We’d made plans to hook up with the San Francisco family, we had not seen them in over 2 years since moving out here.  Ironic since they are now the closest.  It was way past time to remedy that situation.

The San Fran Clan had reserved sites at the Prairie Creek Campground which was about half way between Portland and San Francisco, about 6 hours for each of us.  Mia and I weren’t on the road until about 10AM after dropping “The Dog” off  at “camp” for the weekend. We arrived just before 4:30 so I feel we made decent time.

After hellos all around and setting up camp we all took a quick walk around the campground trails.  It didn’t take long to see big trees and the famous Roosevelt Elk. 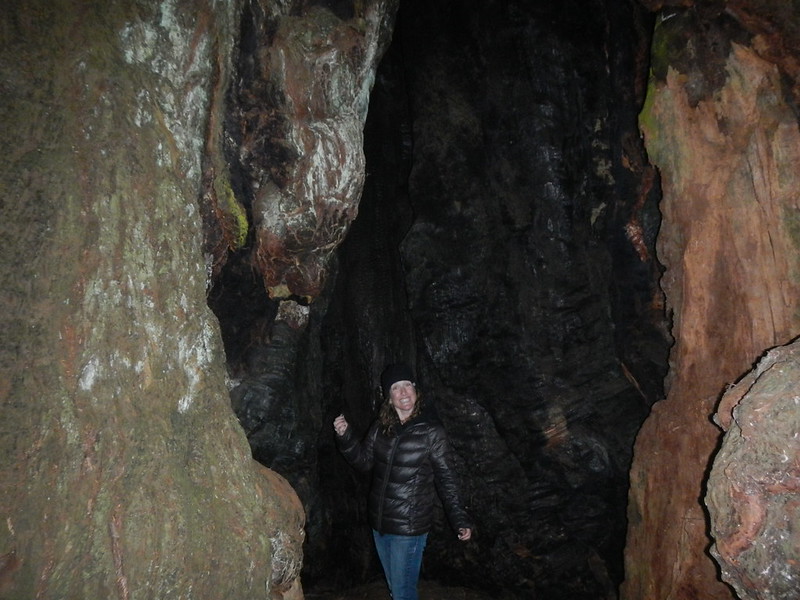 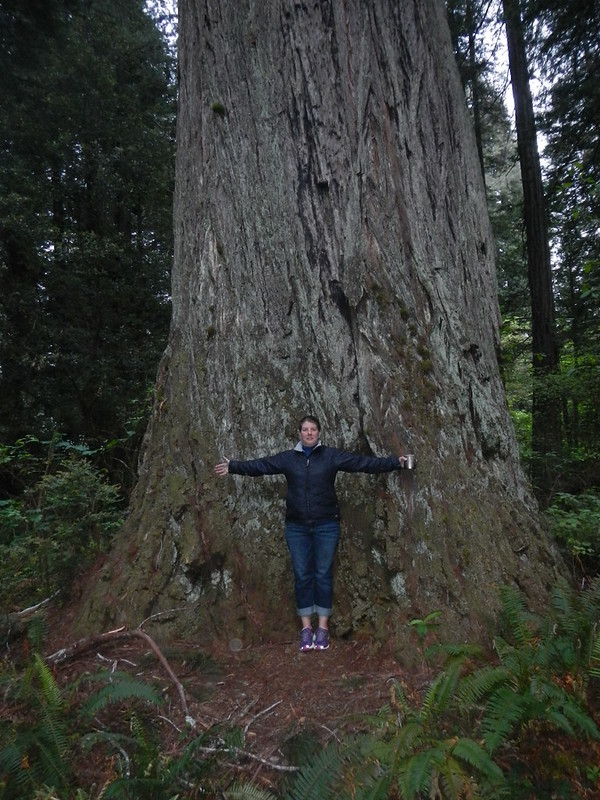 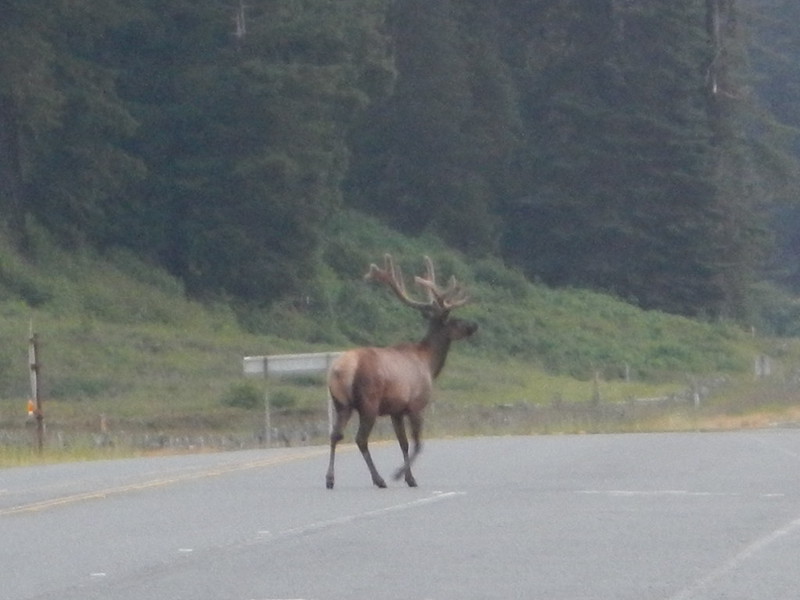 It’s so difficult in pictures to capture the size of the trees.  I have a couple that seem to do the job fairly well though.

This one we’re standing in a burned out stump remnant of a tree.  It would have been HUGE had it still been standing 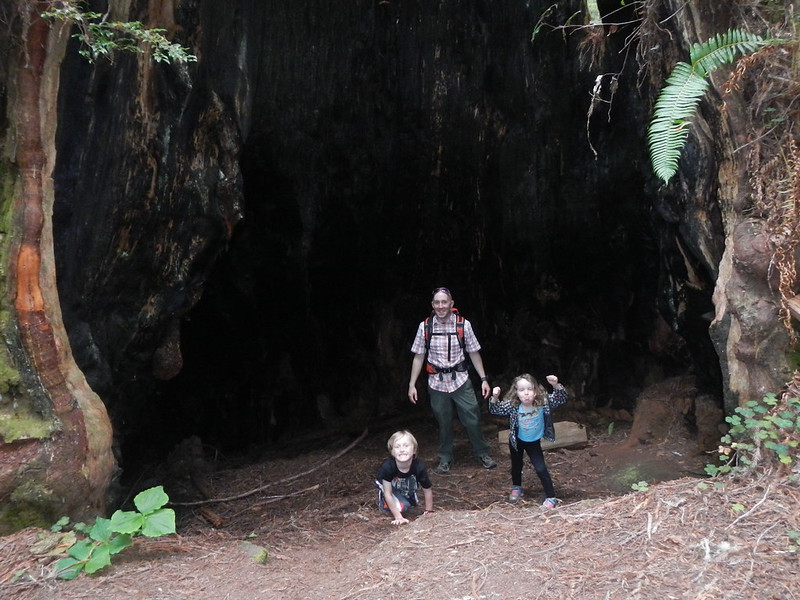 This one was aptly called “Big Tree” and was just over 300′ tall. 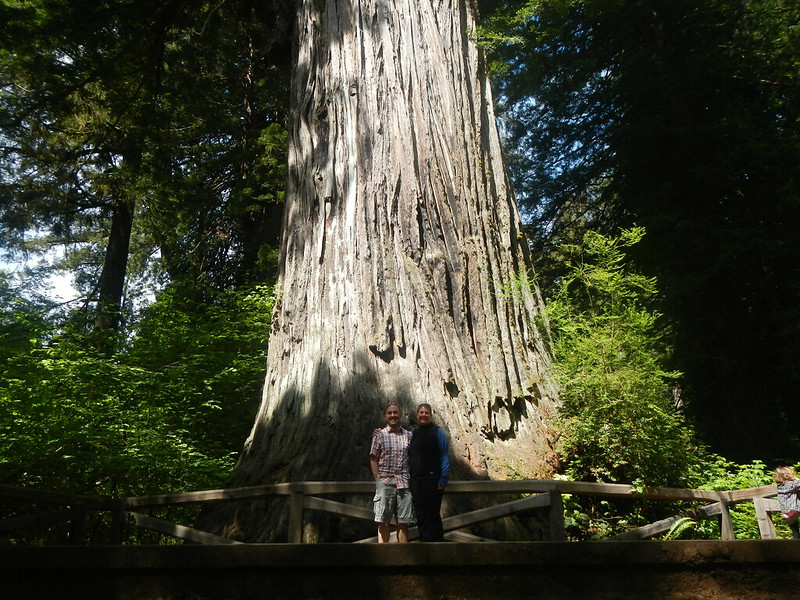 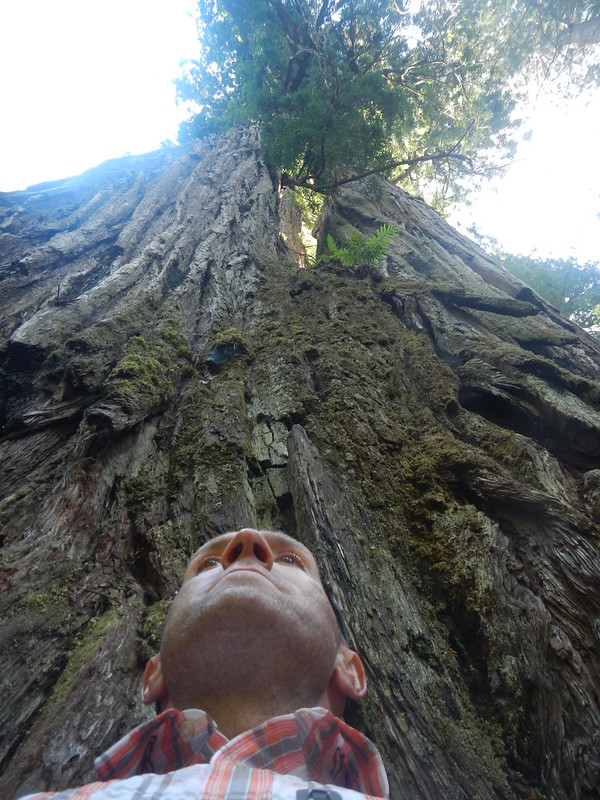 Saturday we did an awesome hike in Fern Canyon that turned into an 8 mile “jaunt” through the woods.  Nate and Neko did awesome for the distance, though I think they slept pretty soundly that night. 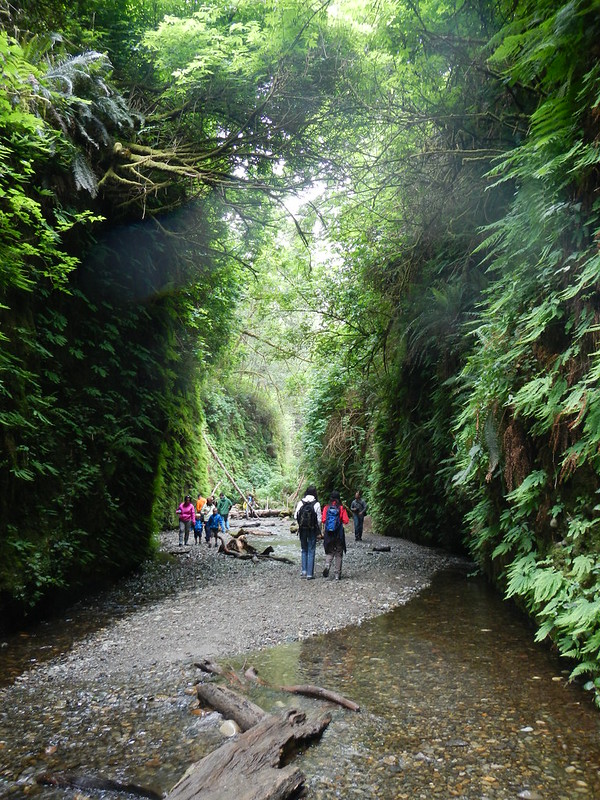 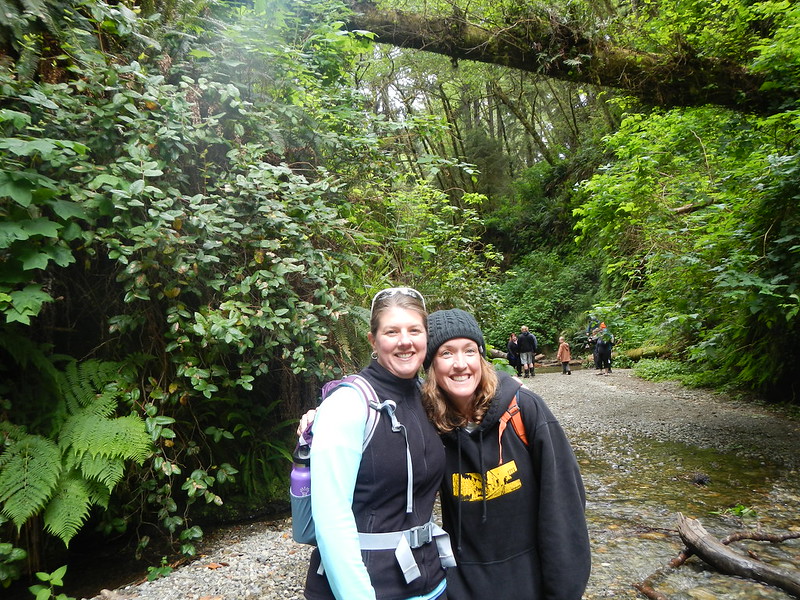 The hike started out right up a stream bed and involved a lot of scrambling over some very large downed trees. 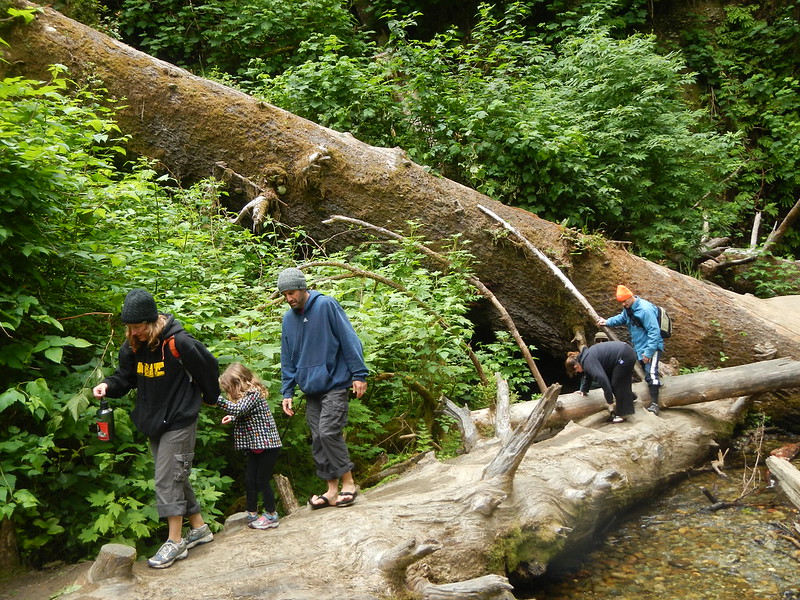 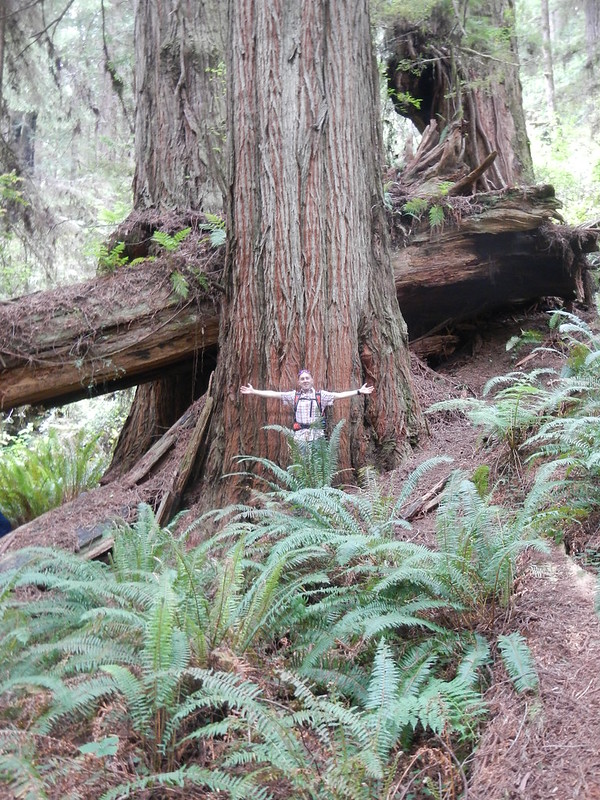 After the hike we hung out on the beach 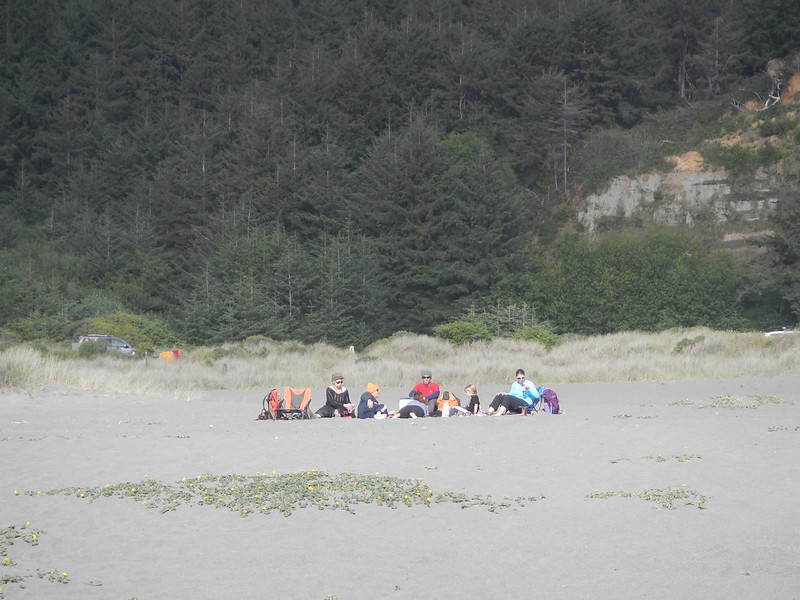 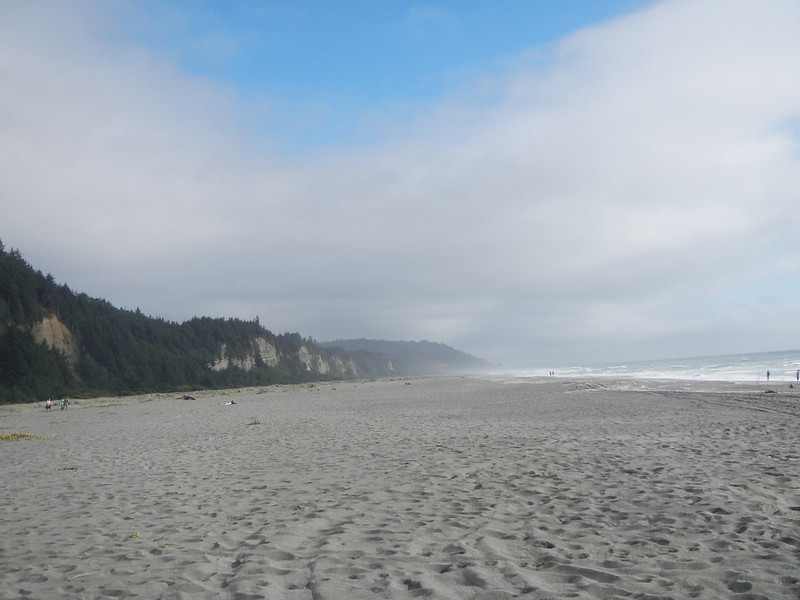 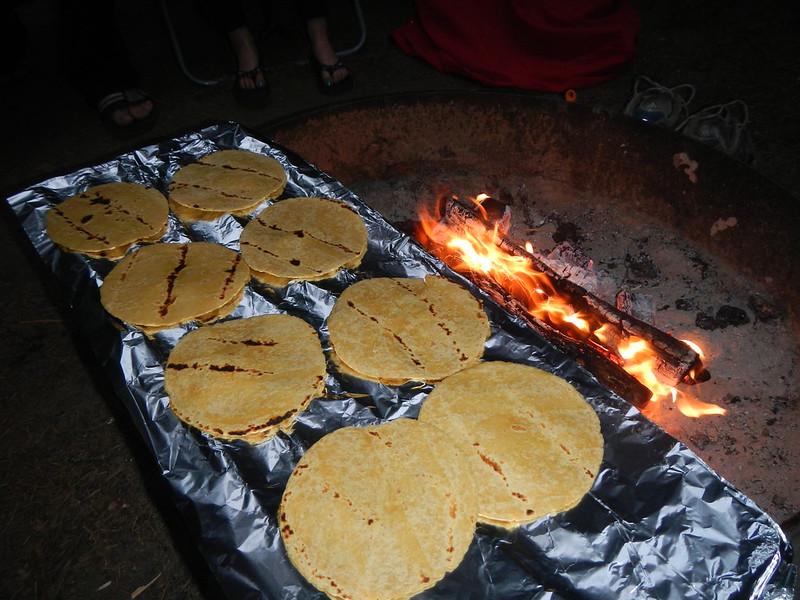 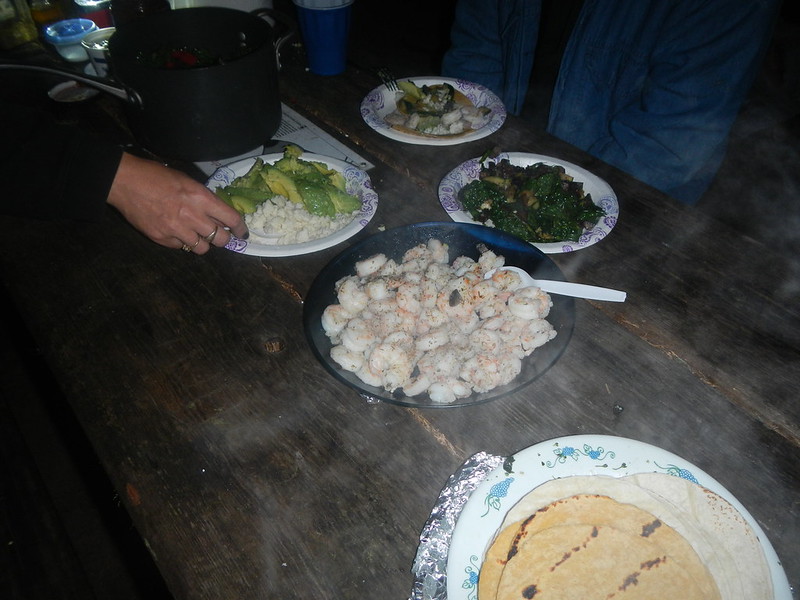 Sunday Howie and I biked to Klamath and then we all hung out on the beach hoping to see whales.  Unfortunately no whales were spotted, but we did see a couple dozen seals, some osprey, pelicans and what we think was the second bald eagle sighting of the weekend. 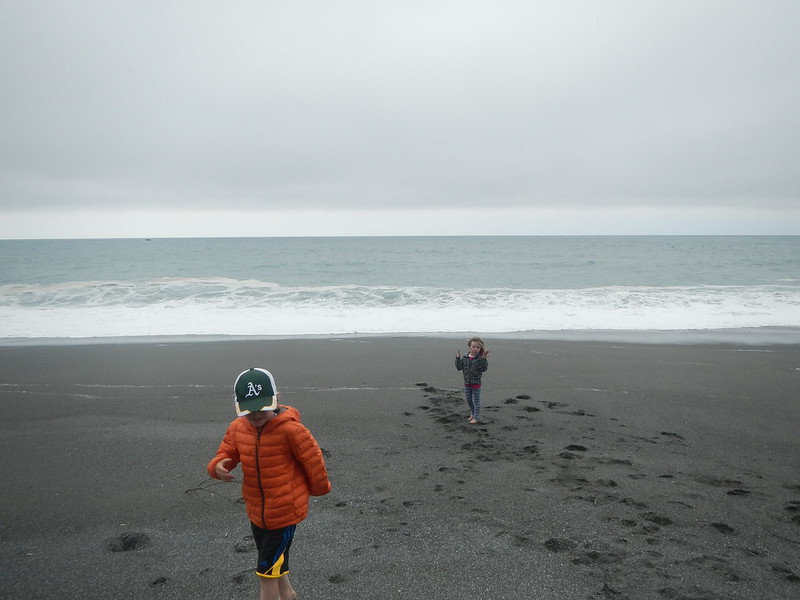 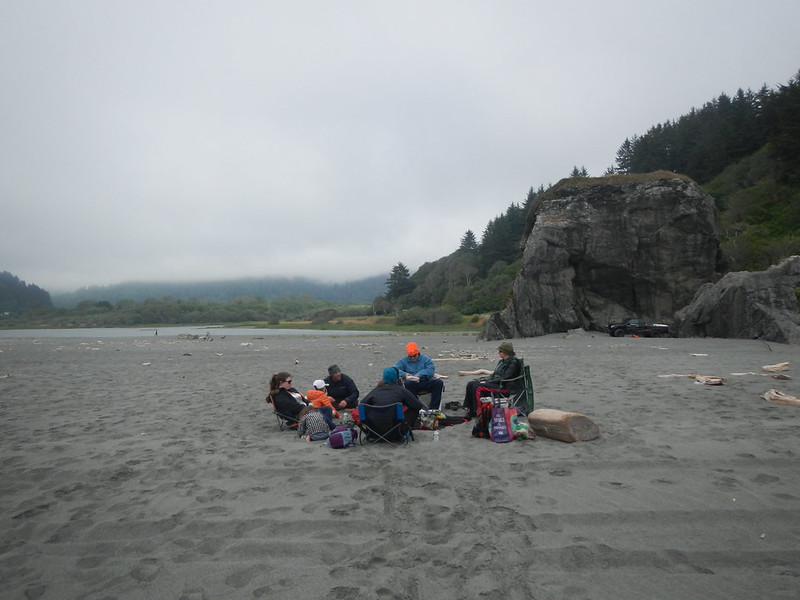 It wasn’t very sunny or warm, hence everyone was bundled up.  But the views were spectacular 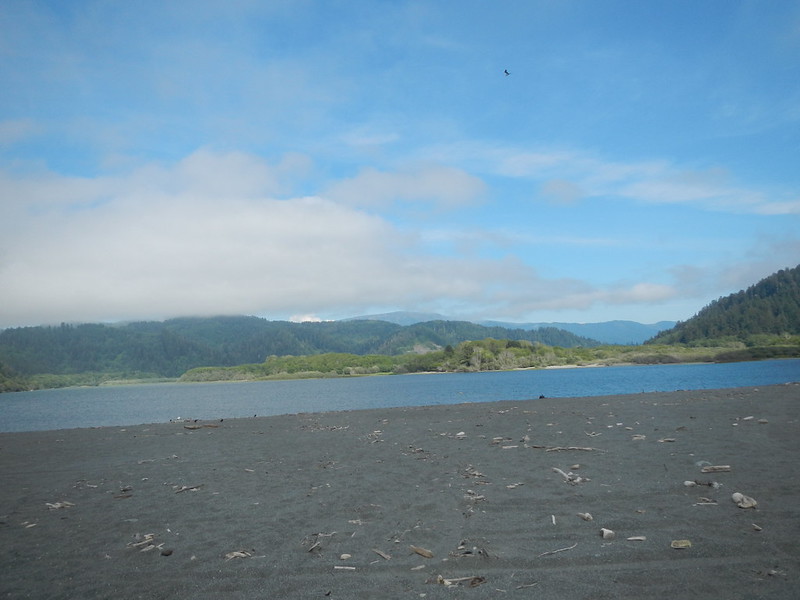 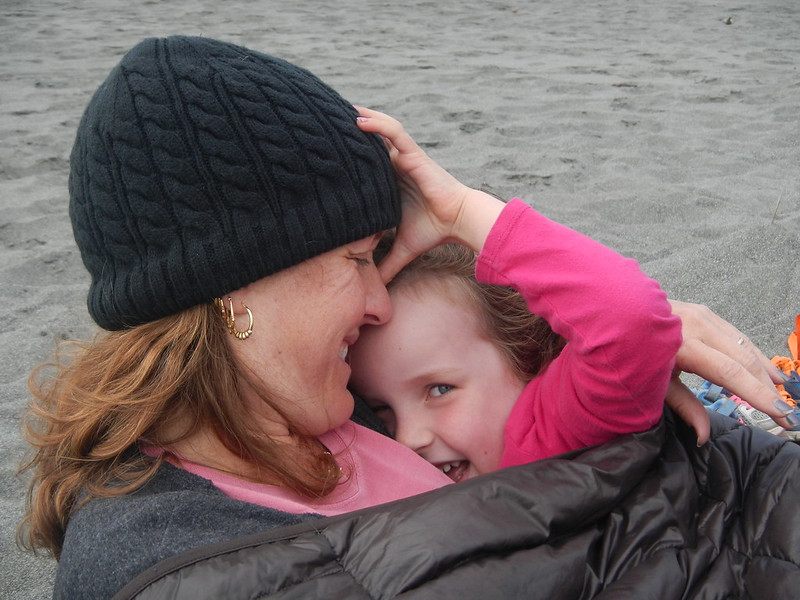 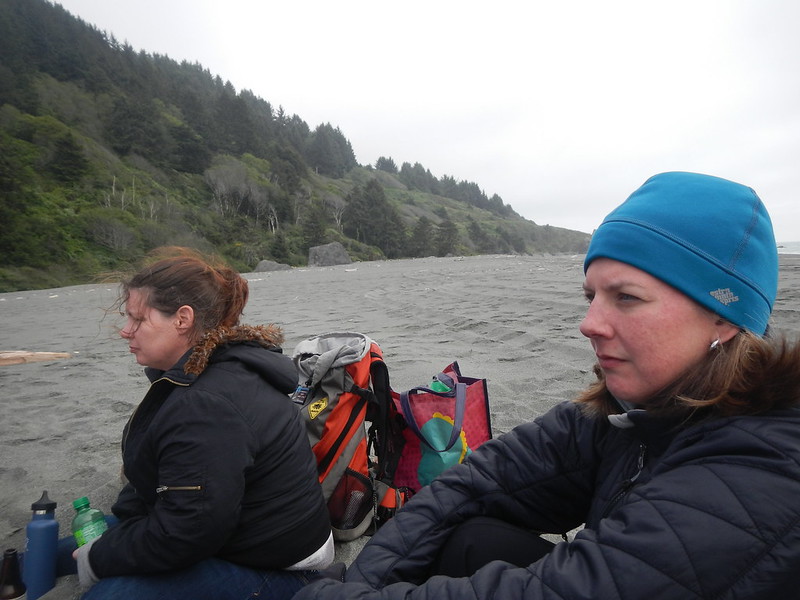 It was Mia and my night to cook dinner for everyone so we went with pasta, pesto and chicken sausage.  My only goal was to get it all cooked prior to the sun setting since the previous two nights we were eating at like 9pm.

With that goal accomplished, it was also time for smores!  I think Nate liked that idea 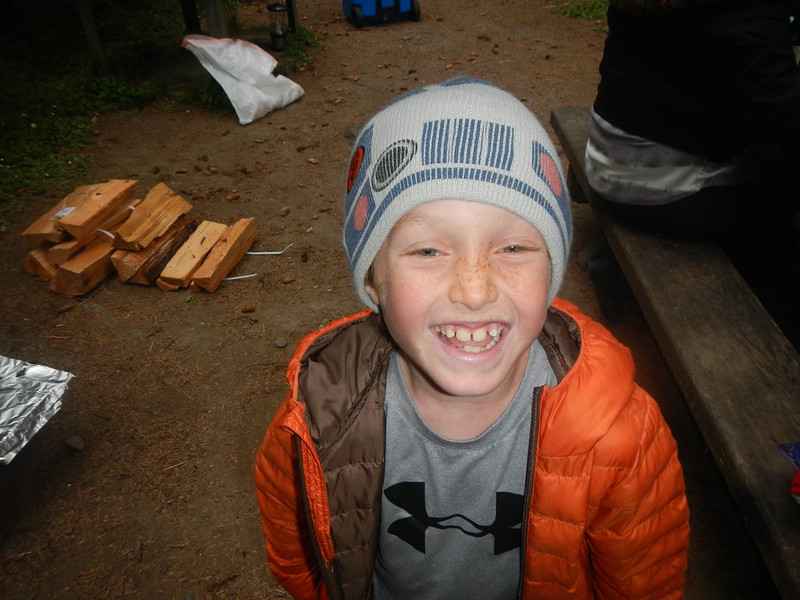 Monday came way too quick and it was time to pack up camp and head out.  Prairie Creek is a great location, and I will definitely add it to the “must return” list.  Hopefully this camping with the San Fran Clan becomes an annual tradition.

Instead of heading straight home Mia and I decided to take a small (almost 200 mile) detour up to Crater Lake.  We wanted to see it and we’ve been living here two years now, so it was about time.  It also gave us a chance to gauge the area and make some plans for a return trip.

We headed out of Grants Pass, OR in the low 80’s and as we drove to the 7,000+ feet of elevation at Crater Lake Lodge we watched the temps drop, and drop, and drop.  It was barely 50 degrees at the crater’s edge.  Pretty neat idea to go from low 80 to barely 50 in just under 2 hours.

Needless to say, the lake is spectacular.  My photos don’t do it justice. 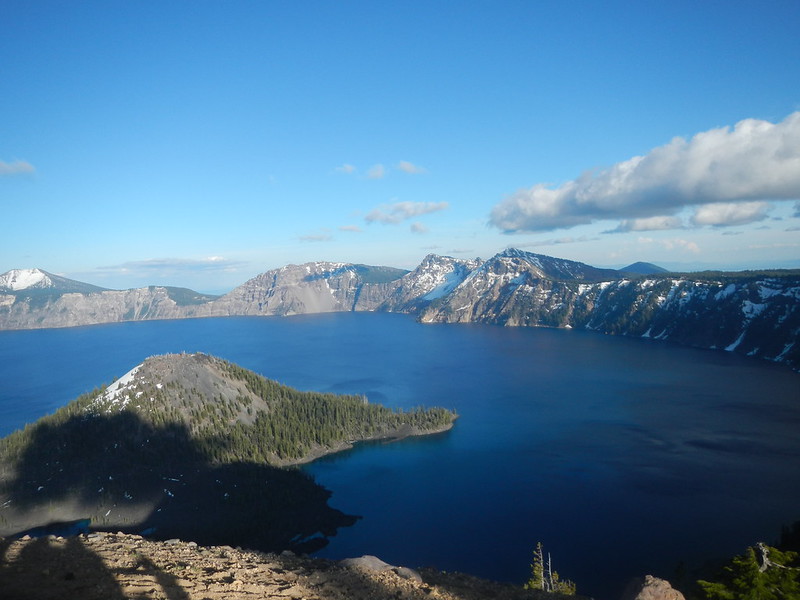 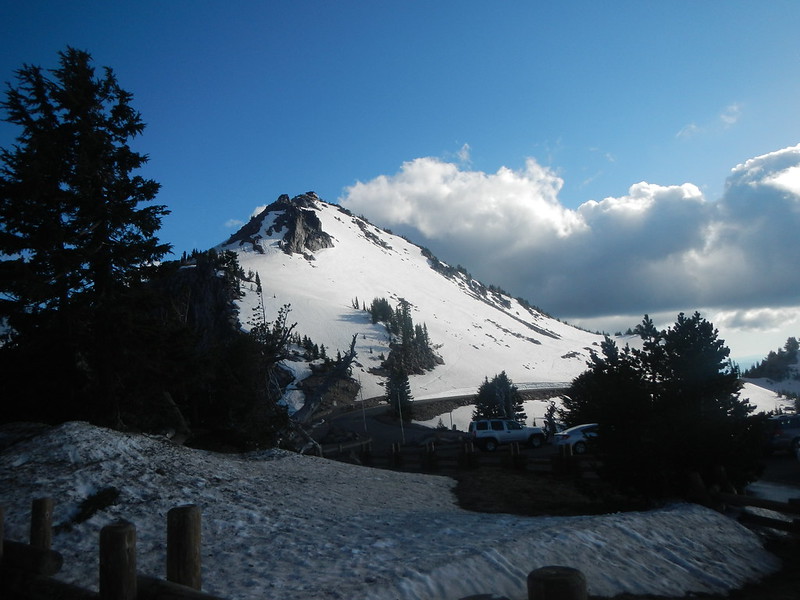 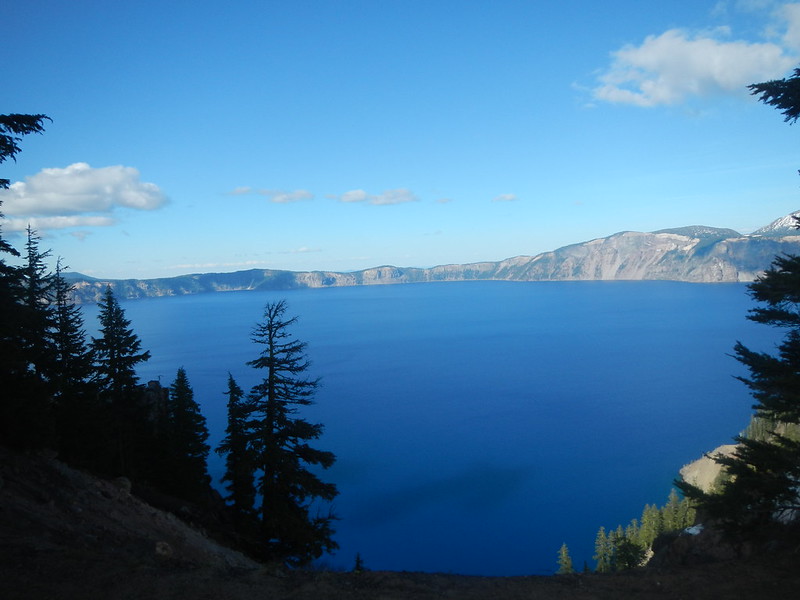 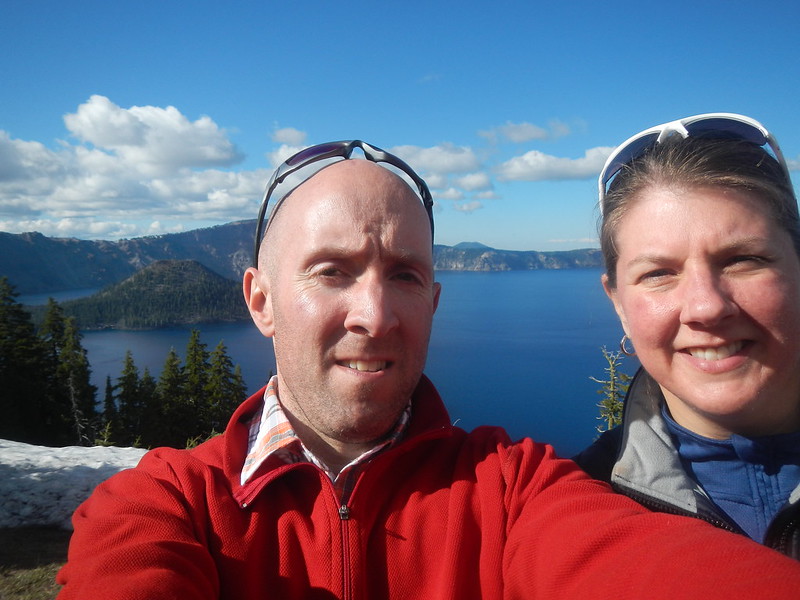 I’m already planning our adventure back.  It probably won’t  be until next year since the Lodge is booked solid for this whole season, but maybe we can squeak out that way for some backcountry camping.

All of the photos can be found here

It was awesome for Mia to see her cousin again, we’ve made the promise to not take so long a break before we all see each other again.