It’s been a good couple weeks.  I did the Gateway to the Gorge 8 Miler on the 12th and somehow ended up 2nd overall and won the Masters Division.  I was “accused” by an unnamed friend of finding the least competitive races around, but my reply is you can only compete against those who show up.  I didn’t think it was because I was intimidating the competition.  The 16 year old kid who won ran with me until about the 6 mile mark, and then he got a pretty good gap in about a mile and I just couldn’t close it down.  Not too disappointed though, I was happy to win the old guy division.

For my effort I won a pair of 361 degree shoes.  They are a new to the USA shoe company, but apparently are a $1 billion-ish company.  I should see them in a week or two and will give them a try.

Sunday last week Mia and I had a pretty lazy day.  I was pretty sore from the day before and had to do an easy 1 hour run as part of my training for the Silver Falls Half.  I loosened up after about 20 minutes, but then was even more sore going into Sunday evening…..gotta love this running stuff.

That leads me to my next train of thought.  Running hurts!  Cycling is so much easier on the body.  I definitely notice more little aches, pains, injuries, etc  during the past 8-9 weeks compared to riding.  I like the dull ache and fatigue from a good hard ride, but man running beats me up.

Anyways, onto the next subject.  Another sweet hike with Mia and Codi to Falls Creek Falls.  This is a very popular hiking, mtn biking and equestrian trail.  Luckily no horses during the hike, and surprisingly only two cyclists.

The hike to the lower falls is the best bang for your buck and is only 1.7 miles from the trailhead.  The parking lot is HUGE after a couple miles of Forest Service Road driving.

We got kind of a late start from Hillsboro, so we weren’t at the trailhead until about noon, but the intended hike was only about 6.5 miles total, so we had very little to be concerned about. 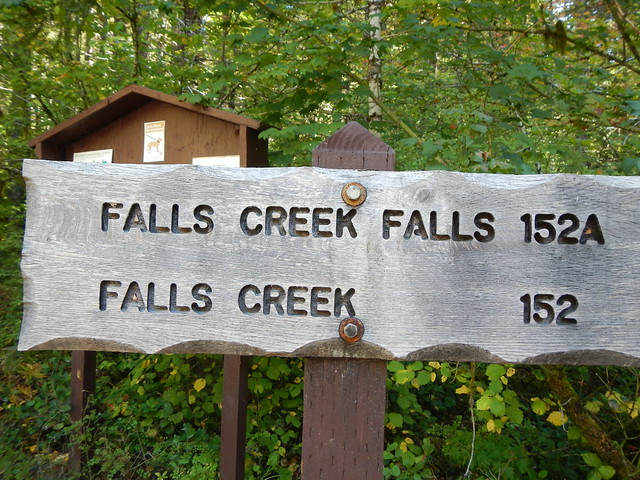 We went to the falls first to get the views in.  It wasn’t super crowded on the trail to the falls, but once we got there it was like a party.  Part of that was due to the Boy Scout Troop that was hiking in on Saturday and spending the night up above the falls.

It was hard to get a good shot, either too much sun or too much shade, but it was still very pretty.  We didn’t hang around too long since it was a full house.

The falls are a two stager, first cascading down into the first pool, and then taking another dip down into another pool.  Pretty neat.

We had to backtrack to the trail to get up top.  It was a pretty quick huff and puff up to the top and along a nice flat, but forested plateau.

Off to Mia’s right were the cliffs looking down into the valley we just climbed out of.  From one point you can even scramble down to the upper part of the falls.  It was not something I would subject Codi to.  It would have been hard enough to get myself down there, and I am sure Codi wouldn’t have enjoyed it.  So we just enjoyed the views.

There were a couple nice areas that would make a nice campsite for the overnight.  Two of them near the cliffs and then one near a smaller waterfall along Falls Creek.  This was the destination of the Boy Scouts.

This would definitely be the place to camp for the night.  We even saw a couple deer romping through the forest on the way back out.

We hiked about another mile past the campsite/waterfall area and had a snack on a log.  Then it was back the way we came until the intersection to go back down to the lower falls.  From here we stayed straight on trail  152 and back to the parking lot.  Hiking it was fun, but I can see why it is such a popular mtn bike loop.  This section would have been really fun to ride as it had some good flow built into it.

All the pics can be found here.

Really looking forward to next weekend since Paul will  be in the PNW as he and Shannon drop Travis off at college in Bothell, WA.