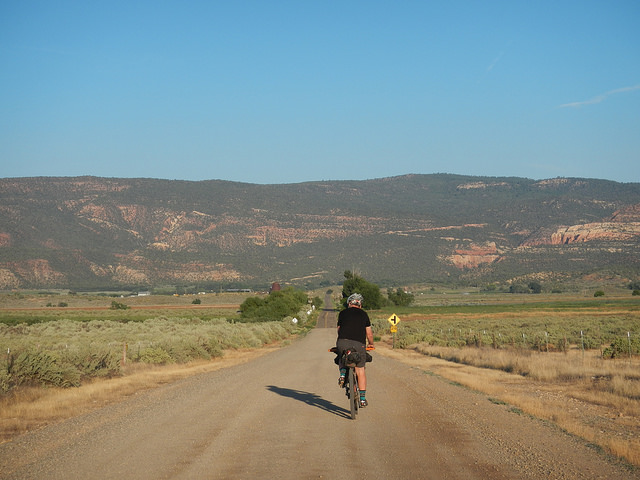 All 6 of us had been talking about day 6 since at least day 3.  I was trying to be optimistic and kept up the mantra of “it’s only 2o miles”.  I could have easily said it was “only 1 hill” too, which was true.  One 23 mile long hill!

Remember when I said that we dropped 1,000 vertical feet in 1 mile yesterday.  Well today we had to climb back out of Paradox Valley and head into Utah.  While we didn’t gain 1,000 in 1 mile, we did end up doing around 2,000′ in 5 miles.  It was pretty relentless!  The bonus was that we started early and the temps were reasonable in the low 70’s.  I could not imagine climbing this route in the heat of the day.

Today was kind of an every man for himself day.  The route was easy to follow and everyone had queue sheets or GPS route.  I personally decided to take it as an easy day.  I was not going to push the pace at all.  I referred to it as “sagging the TT”.

You  know a climb is steep when you hit the 8% gradients and it actually feels like a respite.  So have I talked enough about how tough it was?  I really don’t know if I can do it justice.

After a very brief downhill and along a reservoir we got just a bit of respite as the climbing eased off (but did not stop) for just a bit.  This is where we also crossed from Colorado into Utah.

I stopped for my PB&J at the state line.  At this point we were all scattered along the route.  Troy passed all of us on the first climb like we were standing still.  I later found out he was going for the stage win in the TT.

From this point on I just wanted to be done.  I was watching the miles tick by and as I got into the upper teens, I was thinking only 3 more to go.  Turned out it was 5!

So the road tilted upwards once more not long after this shot.  I turned off the gravel and onto the what I thought would be the last 3/4 of a mile to the Geyser Pass Hut.  I did not notice the name of the road was “2 Mile Road”.  I was at 20.3 miles and figured I had 0.7 miles to go. Ha!  Wrong!

There may have been some profanities uttered in this last 2 miles…..who am I kidding, there were a ton of profanities uttered in this last 2 miles.  It honestly just would not end.  When I finally reached the hut Troy was just heading out to  help ferry up some people’s gear.  He had been there for about an hour already!  Like I have said before, that dude is an animal.

I was only capable of taking care of myself at this point and basically did my soda, canned pears, anything salty routine.  I took the opportunity to do the advanced outdoor shower in order to scrub as much grime off as I could.  Basically this meant a bunch of wet wipes, water and hard scrubbing.

Everyone eventually made it.  Everyone refreshed their profanity vocabulary in the last 2 miles.  Great bonding moment.

Tonight was another chance for me to cook and  I’m a huge fan of breakfast.  That meant pancakes for dinner.  I made apple and bacon pancakes for the first batch and then Dave continued whipping out more apple pancakes for everyone when we ran out of bacon.  I do believe that this was one of the highlights of dinners for me (Paradox was #1).

We were all in bed early this night.  I don’t think the sun had even fully sunk yet.  One final day to go and we’d be done.  At this point we were all referring to missing our wifes (or girlfriend for Nick), pets, beds, SHOWERS, etc.  It had been awesome so far, but we were ready to get back after one more day of adventure.

That is it for day 6.  I’ll wrap it up tomorrow with day 7 and some final thoughts.

Thanks for reading, and all day 6 photos are here