I’m almost hesitant to once again talk about the Methow Valley. As I have mentioned numerous times before….It.Is.Paradise! (or at least Mia and my definition of paradise). So I’m afraid if I keep talking about it too many people will go there. Selfish? Yes. I’ve got no problems admitting that.

This year we couldn’t get into our rental house until Monday so Mia and I opted to spend a couple days in Leavenworth, WA first. We’d been interested in checking it out for some time now. I even have a guy I’ve known since elementary school who lives there. It also broke up the long drive to Mazama which was actually quite nice. 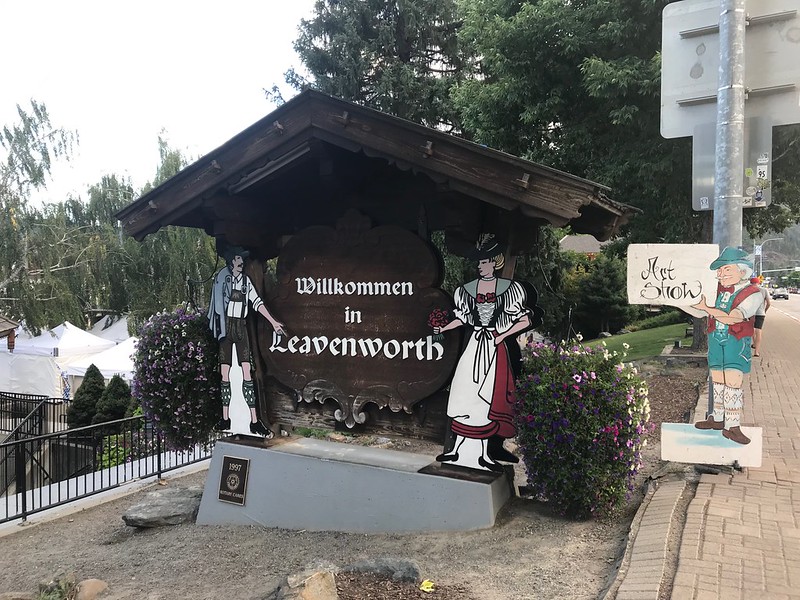 Thanks to Steve Copson we had some suggestions on some dog friendly hikes and places to eat in the area.  A lot of Leavenworth is surrounded by National Park/Wilderness that does not allow pets.  Up towards Steven’s Pass though you’re in National Forest and pets are allowed.

We opted to hike Lake Valhalla and it was awesome!  Being Labor Day weekend it was just a tad crowded.  We pretty much expected that but man there were a lot of cars up there.

Given all the cars and the sheer number of destinations from the area it wasn’t as crowded as we feared.  I would recommend this hike to anyone…….just go midweek if you can.

We also spent some time exploring the waterfront park and letting Codi swim in the river.  There are is A LOT of dining and shopping options in town too.  So while we found the area beautiful and there was great access to numerous outdoor activities, the town of Leavenworth itself was a bit kitchy and too touristy.  Yes we’d go back again, I just don’t know if I would make it my sole destination for an extended stay.

On Monday we made the rest of the journey up to Winthrop and our rental house for the week.  We hiked what are becoming “classic” hikes for us while up there too.  Blue Lake and Cutthroat Lake.  Also had the chance to finally complete the Maple Pass Loop that was still buried in snow last year when we tried.

Maple Pass was absolutely stellar.  You have awesome views above treeline of the surrounding cascades peaks.  There is probably no better bang for your buck hike for only 7.5  miles in the area.  It’s definitely an addition to the list of “will hike it again”. 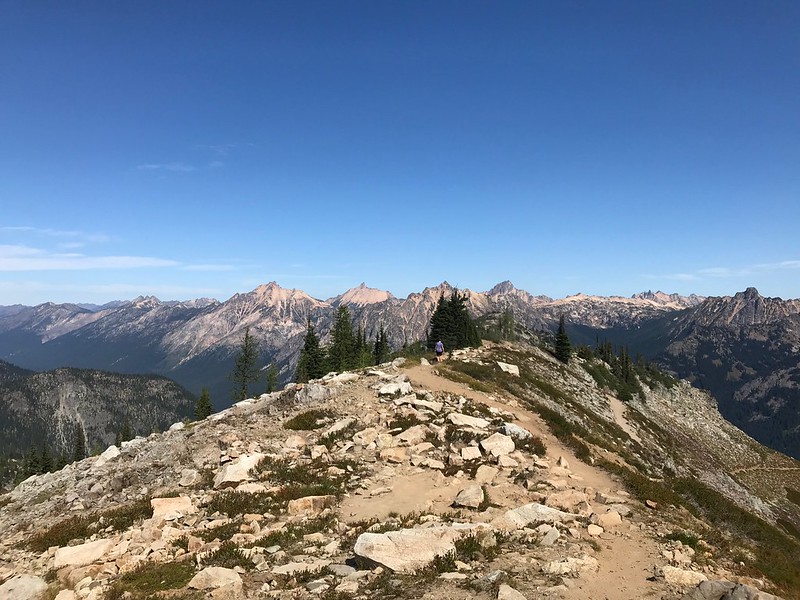 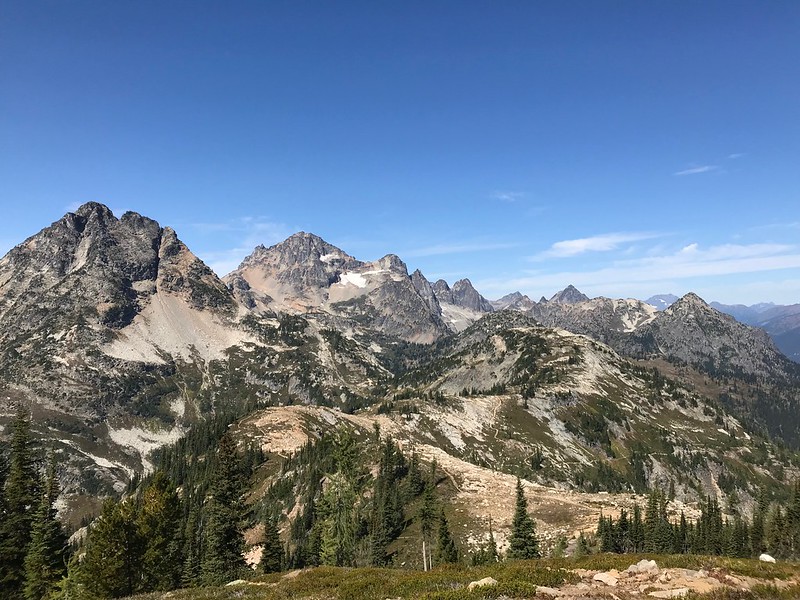 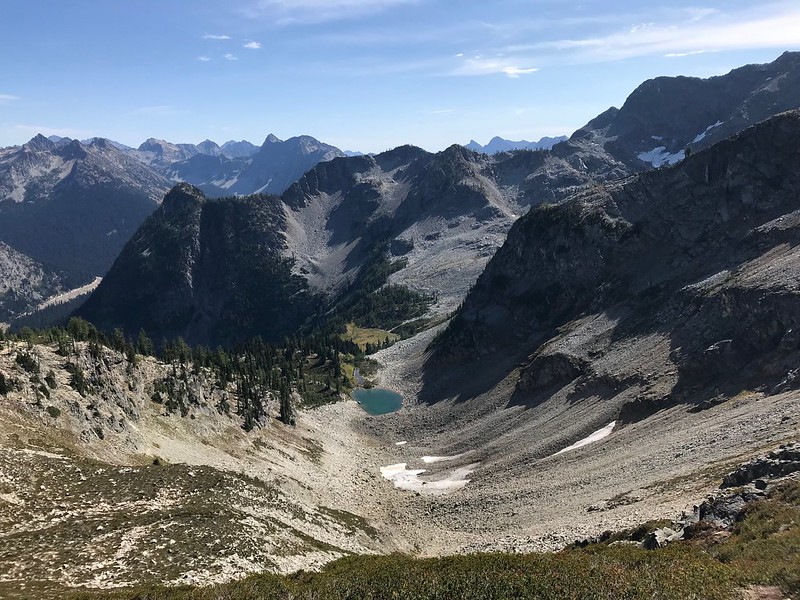 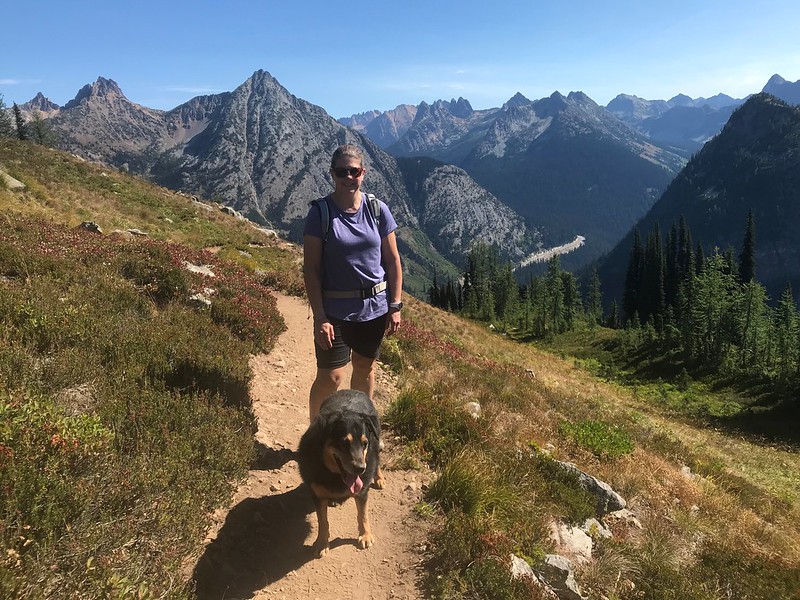 On the only overcast day of the week we did a new hike right outside of Winthrop called Lewis Butte.  It is a new trail and wasn’t even on our couple years old trail map.

I also finally got to ride Harts Pass.  Starting from the Mazama Store it is a 42 mile roundtrip ride with 5,500′ of elevation gain.  Just “one hill” too.  It was HARD.  I had several days of hiking in my legs at this point and my riding had taken a sharp dip down in August.  You could say I felt fresh, but definitely not in primo shape. 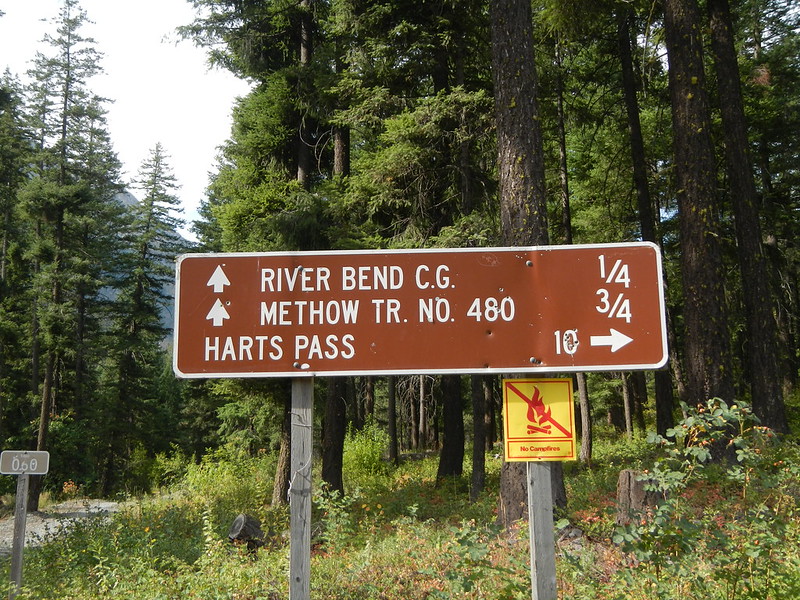 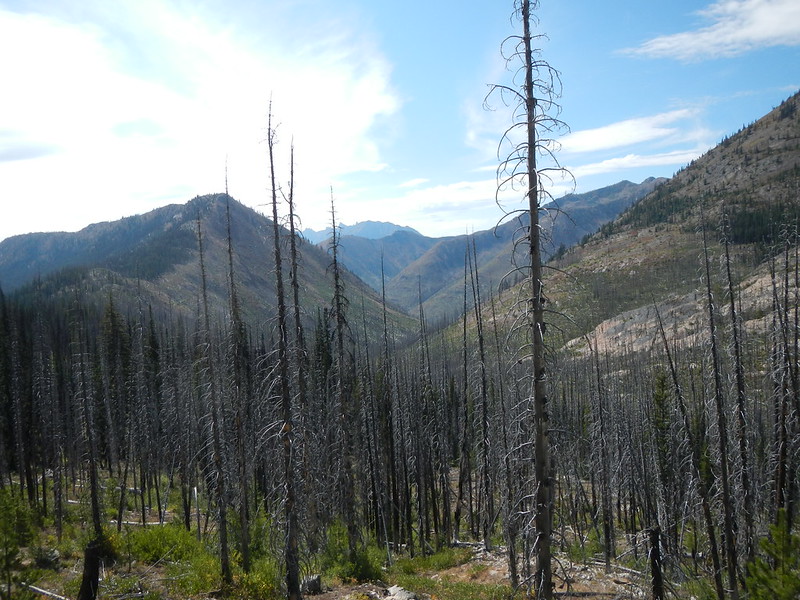 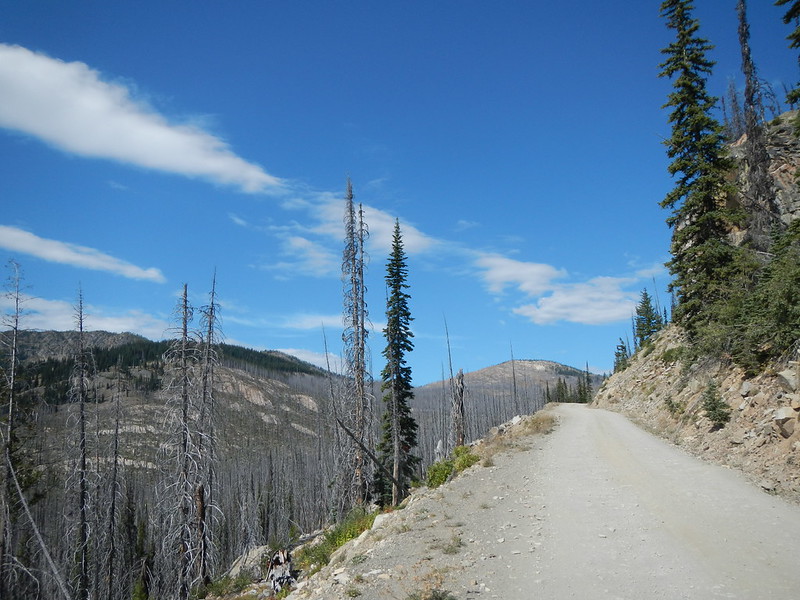 I tried to leave early from the rental house to avoid too much automobile traffic on the road up to the pass.  There are a couple narrow sections and a mix of smooth gravel, washboard hell and pot holes galore.  I would say it is most definitely the hardest climb I have done in quite some time.  I will be back, hopefully in better shape, to try it again.  In hindsight I would probably ride my Salsa Timberjack with rigid fork vs. the Niner RLT with 650 x 48c tires.  The descent has enough “oh crap” sections that a larger and slightly  more aggressive tire would have been the better choice.  Your opinion may differ but for my riding style I’d rather have more of a mountain bike tire.

I could have continued up another 1.4 miles to Slate Peak area but at this point I was kind of wrecked.  I climbed for almost 2 hours and descended to the start point of the climb in around 30 minutes (I may have passed a couple cars too).

The worst part of the whole vacation was coming home on Monday!  Neither Mia or I want to leave.  We both look forward to hopefully making the Methow Valley a permanent home some day.

You can see a boat load of pictures here.