Hitting another time zone made that possible, and also the simple fact that off of I-80 through Wyoming, you have very few choices of places to stay.
Let me start by saying, I take back the comments about Nebraska being boring……I-80 through Wyoming is almost 10 times worse.  At least in Nebraska you saw farms, cows, and some semblance of life.  In Wyoming though, other than Cheyenne and Laramie there is almost nothing to see at all.  Many of the highway exits left off at more or less dirt roads and there was not a single house or business in sight.  There had to be something though, we saw random cows and horses grazing, but not a house to be seen near many of them.
We crossed the continental divide today!  7000 feet, we also hit I-80’s highest point at just over 8,000 feet.  The wind during the Wyoming portion of the trip was absolutely brutal today.  It was difficult at times to get over 60 mph because of how strong the wind was.  Towing the trailer does not help either.

Tonight we are staying in Rock Springs, WY.  This town is pretty cool, it used to be an old coal town, and most of the current infrastructure appears to be in the pits where they dug out the coal.  Right now the city is in the midst of a resurgence because of the growing mining for natural gas going on here.

While here we ate at Bitter Creek Brewing Pub tonight.  It beat the hell out the chains we’ve been eating at this week.

NH Moose at the Lincoln Monument 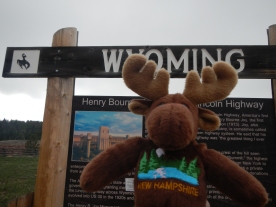 Eastern Wyoming did offer some more landscape than Nebraska